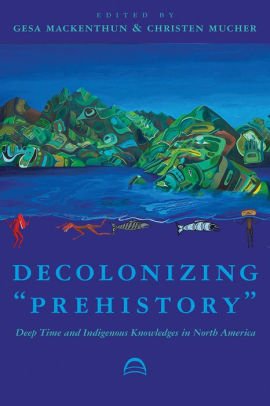 The how of seeing reality fundamentally conditions the reality we work with. So to me, seeing nature solely through the lens of Western science is part of the problem. This book, reviewed here, reminds environmentalists (and others) of another, more deeply historical way of seeing/knowing the world: as a participant in storied, inter-generational relations within it, and sharing responsibility to keep those relations in balance.

This book packs a double revelation and, with it, an important message for the environment movement. First, it lays bare the rhetorical sleight of hand through which so-called pre-historical knowledge and ways of knowing were swept under the colonial carpet.  Second, it offers hope for healing human relations with the environment as these indigenous knowledges and ways resume their role informing policy and action on the ground. The cover art  – a painting  by Cowichan/Syilx Lawrence Paul Yuxweluptun of  the coastal mountains rendered with facial features familiar from Coast Salish ceremonial masks – tantalizes the imagination with that offer.

The disappearance of traditional knowledge happened simply. European elites associated with the first text-based learning decreed that only what was written down should constitute legitimate history and anything spoken that preceded this or even ran alongside it shouldn’t count. It was prehistory. This suited colonialism well as it disenfranchised Indigenous peoples from orally transmitted knowledge they had long used to inform and guide how they lived. It even denied them “the right to have a history in the first place,” reducing them to objects. This left nature cut off from a storied past with humans,  which helped set the stage for it to be re-understood later as needing to be conserved as a “wilderness ideal.” It also left what one anthropologist called a monological understanding of history, centred on linear time and the ideas of mastery and progress, now trending toward an extinction endgame. Because other understandings, centred more on cyclical time and the ideas of cooperation and reciprocity, have been suppressed.

Now modern science is catching up to these other, older understandings, and giving credit where it has so long been denied.  The book, a collection of essays by a range of academics, contains some delightful examples. One is evidence of a volcanic eruption in what is currently called Oregon that happened 7,700 years ago. The geological facts neatly line up with oral history, preserved as a mythic struggle between the spirit beings who created the world the local Indigenous people inhabited. The local peoples, the Klamath and Modoc, called the place Gi’was;  U.S. map makers called it Crater Lake, after the collapsed volcanic mountain, Mount Mazama. In the orally archived story, the eruption is an epic battle between Kmu’kamsh, the geological creator of the world, helped by his younger brother Weasel, and the Thunders over the theft of a magical cap. At the end, Kmu’kamsh – also known as Old Marten –stands on top of the burning mountain  popping open the hot hearts of the Thunders as they fly into the sky.  The resultant destruction of the mountain forced the local people to move away, leaving sandals buried under the ash and cinders for geologists to discover later.

As Gesa Mackenthun writes in this chapter, “the stories related to Gi’was arguably represent the oldest evidence of the cultural effects of a volcanic eruption on a group of humans in world history…” Not only do such stories affirm “that Indigenous stories do remember cataclysmic geological events.” They remember them as history, inclusive of non-human as well as human agents – i.e., as “full of transspecies worldmaking.”

Stories like these not only confirm the deep historical connection these Indigenous peoples have with the lands that they inhabit. They also affirm ongoing kinship ties with its animals and ancestral spirits, something Keith Thor Carlson, writing with Naxaxalhts’i (Sonny McHalsie) further illustrates  in his chapter about the Sto’:lo Coast Salish and mnemonic features of the landscape that recall ancient origin stories. “these original people’s sentient life force (shxweli) continues to exist within transformer stones, plants and animals,” they write, allowing the Sto:lo to “recognize ongoing kin ties between themselves and the environment,” which in turn are “integral to their ancestral identity and contemporary spiritual health.” A number of transformer stones and related sites have already been destroyed – first during the 19th. Century gold rush, and to make way for steamboats on the Harrison and Fraser Rivers. Now, another is threatened by Canada’s TransMountain pipeline project, effectively “compromising the delicate balance between the forces contributing to social and economic cohesion among and between Sto:lo tribal communities.”

Settlers and other newcomers to North America are unavoidably cut off from a connection with ancestral land and what it means to have inter-generational relations with all the life forms co-inhabiting it. Does it matter? One thing seems clear from this collection of essays by mostly non-native academics in fields ranging from the humanities to anthropology, archeology, heritage management, history and the law: that pursuing knowledge of the land and about the environment only  in a similarly cut-off way, through the objectifying lens of statistics and instrumental techniques is insufficient. They have responded to the “challenge to scholars” that Philip J. Deloria puts in his, the concluding chapter: “to see Indigenous peoples…not as objects, good to think about, but as intellectuals and historians in their own right, good to think with, in partnerships borne out of respect.” And so in the opening chapter, Annette Kolodny celebrates the 1980s Land Claims Settlement that recognized the Penobscot Nation’s historical responsibility for the Penobscot River (in Maine) as part of its territory, and the nation’s work with industry to restore the river to fish-sustaining health – thus affirming their historical self-understanding that “the river is who we are.” And in his chapter championing an emerging indigenous archaeology and the importance of archaeological field projects (e.g. for the forestry industry) co-designed and even led now by Indigenous peoples serving as “a form of resistance against state or corporate actors,” Jeff Oliver discards notions of “a binary choice between indigenous ways of knowing and Western science” in favour of mutual respect for difference and possibilities for overlap through empathetic mutual listening.

I recommend this book for all those interested in de-colonizing environmental policy making, and even the environmental movement.